This article contributes to the history of German schools in the 20th century and to the current debate about the further development of the system of secondary education. Based on the results of empirical historical education research it focuses on the always existing discrepancy between the official school structure scheme and the respective local and regional school offerings. From this perspective, the tripartite secondary school system emerges as a reform project, which did not shape the reality of the local and regional school offerings at many places up to the post-war period and which is draining off these days as an episode of school history. Especially the „middle layer“ of the secondary school system was hard to implement for a long time and was determined by regional traditions and structural varieties in the German Laender. It can be shown that the integrated, but very differentiated and flexible school structure of the GDR was connect able to regional structural traditions and that the introduction of the tripartite secondary school system in the New Laender after the political turnaround was only short term and „on paper“. A bipartite secondary school system appears today to be a pragmatic and connectable answer to the necessity to rebuild the German school system, which is enforced by the demographic and social changes, which had to be coped with in the Eastern Laender earlier than in the Western ones. 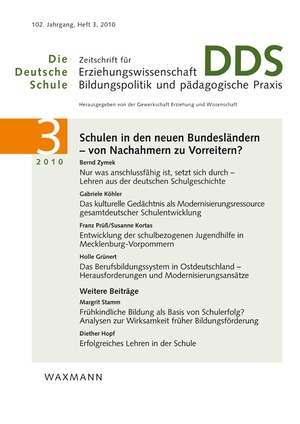