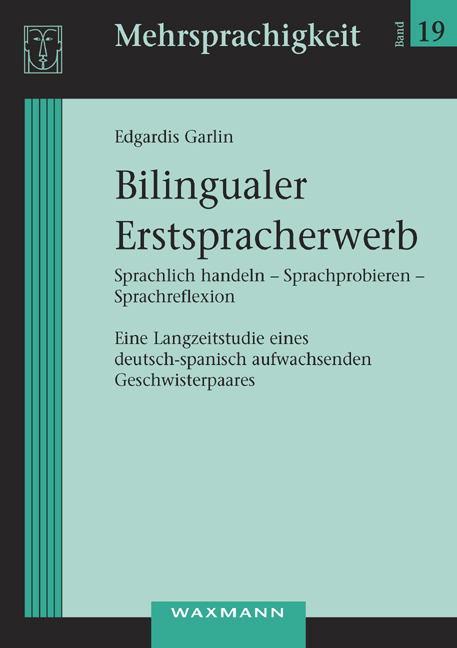 The following work is a longitudinal study: During their first six years, the siblings Luna and Adrian were observed in their bilingual (German-Spanish) language acquisition. This was possible with the help of 256 video and audio recordings in familiar daily situations in Germany and in Peru.

One goal of this study was to show the language development of the children chronologically and in their interaction framework. Included are 45 selected transcripts (ca. 4 hours of recordings). The complete transcripts are available with the extended publication as audio and video recordings (DVD), which greatly extends the possibilities for further studies in this field.

Another goal of this study was to examine three specific aspects of early language acquisition: linguistic action (sprachliches Handeln), language experimentation (Sprachprobieren), and reflecting on language (Sprachreflexion) – in German and in Spanish. The following questions guided the analysis: –

- When and what motivates the children to take action orally? How can this be distinguished from the pre-oral action characteristics? – Which linguistic patterns are learned first, which come later?
- Which ones are influenced by their societal environment in Germany and in Peru, respectively? –
- What patterns of language experimentation are recognizable? What significance do they have for the language learning process? –
- When and in what form are children able to reflect on language(s)? What does this mean for the learning of further languages? –
- What is the relationship between the three aspects of linguistic action, language experimentation and language reflection? What conclusions can be drawn from these results?

The research was carried out in line with the principles of Functional Pragmatic theory, according to which concrete linguistic material is used to formulate theoretical conclusions which, themselves, draw on further material research. On the basis of 37 exemplary analyses as well as 19 documented examples, such as linguistic action patterns, it was possible to discern which patterns where conveyed by the adult and which were adopted by the child on its own.

It was confirmed that the learning of languages occurs through communication patterns, whereas children acquire systematically first the pattern position of the hearer and then that of the speaker. Thereby it was shown that the communication patterns differ from culture to culture. The child does not learn just to speak, but rather how to act/respond linguistically. It was possible to define a list of communication patterns which are typically learned by pre-school children. At the top of the list are the simple patterns of requesting, asserting, question and answer as well as their teach-learn variations. At the same time, these patters are extended in building more complex patterns.

The basis of these interactions is learned during the child’s first year, even before the child actually starts to speak. A prerequisite for this lies in how the adults interact with the child: They treat the child, for all intents and purposes, as a fully developed communicative partner. It is through playful interaction forms that the basis for turn-taking rules is developed together and the first communication patterns are conveyed. It turned out that the adult interaction partner also shows the child the techniques of exact observation and imitation (early teach-learn strategies). What Rehbein’s (1977) introduced as the “progression diagram of cooperative internalizing of actions” could be confirmed on a basic level. Furthermore, it could be proven that what Garlin described as a teach-learn request 1+2 (i.e. the request to repeat) pattern is absorbed by the child and becomes automatic; thereafter, it is then available for the imitation and repair of language.

Also, different patterns with regard to children’s language reflections could be recognized. This includes the verbalizing of language observations, the egocentric, and the child-child-interactive reflection (in the area of phonology, lexis, morphology, and semantics), the reflection on the linguistic learning process itself, as well as the reflection on complex linguistic patterns in role plays. Language reflection thus provides clues to the nature of the relationship between speaking and thinking. Due to specific examples, the progress from the “outer language” to “outer language apart” to “inner language” can be confirmed, as is often the central theme in Soviet psychology (e.g. Vygotskij 1934, Galperin 1957, Leontjew 1973). Finally, the findings prompted the question as to how the knowledge gained from the study could be put to use for early second or foreign language acquisition. The author formulates eight recommendations which are also the basis for her KIKUS-Method for language acquisition for children aged 3 and up.