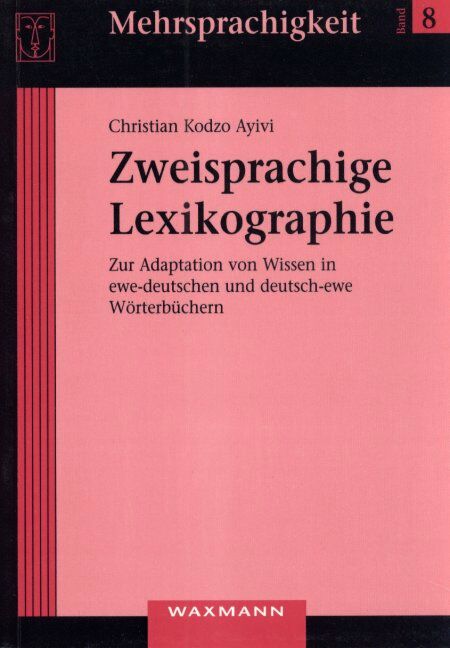 This book is the revised version of my dissertation entitled: “Bilingual Lexicography: A Discussion on Ewe-German and German-Ewe Dictionaries”. The dissertation was submitted to the Linguistics department at the University of Hamburg, Germany. The presentation is a metalexicographic investigation that considers the Ewe-German and German-Ewe Dictionaries written between 1856 and 1954 as a central theme of a lexicographical discussion.

This analysis begins with a historical reconstruction of the compilation of dictionaries for African and European Languages in general and for Ewe and German in particular. I introduce the term of “foreign culture dictionaries” to characterize those dictionaries, because they are not only bilingual dictionaries but have a culturalhermeneutic function of transcending a certain barrier between the culture of the source language and the culture of the target language.

The first chapter will examine the phenomenon of dictionary compilation in Africa during the 19th and the 20th century. Since the existence of written dictionaries is associated with the introduction of European literacy and culture in Africa it is important to ask, whether there is an appropriate form of lexicography particular to African culture or whether dictionaries were an entirely new genre in Africa. For this purpose we will look back to the African Antiquity and look at the ancient Egypt and Ethiopia. This chapter also pays special attention to the ancient bilingual dictionaries compiled for Indo- European and African languages like the Dictionary of the Kikongo language from Eduardo Lopez (1578), the dictionary of Georges de Gheel (1651-1652) and the Grammaire abrégée from the French priest Labat. Especially interesting for the Ewe-Language are the collections of W. Müller (1673) and those of Jean Barbot (1678-1682).

Principal causes of the beginning of a more important period of dictionary production with African languages in the 19th century were the missionary movements, scientific expeditions and colonial conquests. The most important lexicographical work of this period is probably the Polyglotta Africana from Koelle.

Before we continue with the history of the Ewe-German and German-Ewe dictionaries, we will have a brief exposition on the Ewe-Language. The primary goal is to show the differences between both languages involved in the analyzed dictionaries: While the state reached by the German language of the 19th as seen in the first Ewe-German dictionaries was the result of a long process of a written tradition, the Ewe-Language, at that time, has a long oral tradition but was at the edge of its evolution from a oral to a written literary tradition.

The third chapter depicts the history of the Ewe-German dictionaries in four phases: We distinguish at its beginning the glossary phase with Bernhard Schlegel followed by the lithographic phase, according to the procedure used by the main tenant of this era Johannes Knüsli. The third phase is named after the famous missionary and africanist and called the Westermann-Phase and finally the phase after the political independence. Outgoing from empirical and historical facts that I collected, I developed a theory of the history of the compilation of Ewe-German and German-Ewe dictionaries. Another interesting aspect of this chapter is the biography of the lexicographers and the answer to the question, what qualified them to compile dictionaries. At the end of this chapter we will discuss the philosophy of language of Wilhelm von Humboldt.

Chapter five and six deal with the theory of bilingual lexicography and a general overview of a number of typologies as elaborated by Šèerba (1982), Kromann, Riiber & Rosbach (1984). The concepts of macrostructure and microstructure first developed by Josette Rey-Debove (1971) and later by Wiegand (1989, 1989a, 1989b) will also be presented. We will then examine in this context the problem of linguistic interference in the collection of words of Bernhard Schlegel.

This research on the Ewe-German lexicography could not be completed without asking about the future of dictionaries between African and European languages. Chapter seven will be an attempt to elaborate a new concept for the compilation of a German-Ewe dictionary. From a development political and a language political point of view a new German-Ewe dictionary could be necessary to remedy the needs of expression predominating in several domains of knowledge of the ewe-language. In this context, the contribution of a new German-Ewe dictionary would be a transfer of knowledge from one language to another. From a language philosophical point of view, we will go back to Humboldt’s concept of development that we will transpose on the lexicography with the German and Ewe languages. Afterward we will also transpose the Symbol Field Theory from Karl Bühler on the organization of the data types in bilingual dictionary. To characterize a modern dictionary with German and Ewe, we introduce the term of dictionary of Adaptation, that we consider to be a reservoir of knowledge by the use of which, a process of knowledge transmission is activated from an unknown to an already existing domain of knowledge and vice versa. The typology developed out of this for bilingual dictionary is called the “Thema-Rhema-Typology”.

To illustrate this, some samples of dictionary articles will be presented. The entries are based on a technical text corpus. Through this samples one will quickly notice that parts of the adaptations in Ewe arc realized through neologisms. The goal of the tentative is twofold: On one hand, as we mention earlier, it is important to give an adequate answer to the linguistic need of expression of complex thoughts, on the other hand it allows to raise questions about the role of native language in general and of bilingualism for the development of a society.

Throughout this book, we will proceed with the concept Ewe as followed: If we mean the language as noun we will follow the spelling of Westermann and write Ewe in capital letter like Ewe-Sprache, Ewe-Sprecher, Ewe-Land, Ewe-Gebiet. When we mean ewe as adjective, we will put it in small letter like in the following compositions: ewe-deutsche Lexikographie, deutsch-ewe Wörterbücher. Exceptions to the rule are original titles like Ewe-Deutsch- Englisches Wörterbuch from J. Knüsli or Deutsch-Ewe Wörterbuch from A. Knüsli.