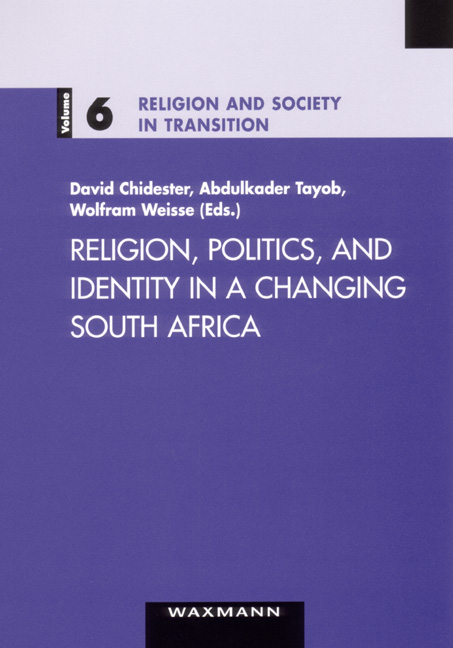 Religion, Politics, and Identity in a Changing South Africa

What is the role of religion in society? In the wake of September 11, public intellectuals provided easy answers. Religion was the problem, as evolutionary biologist Richard Dawkins insisted, since religion was essentially a "misguided missile," an unconscious force only capable of causing indiscriminate damage. But religion was the solution, according to many commentators, who pointed to the ways in which people turned to their own religious faiths, but also participated in interreligious gatherings with people of other faiths, not finding religious resolution for their suffering, perhaps, but finding religious ways to suffer.

South Africa is a country that embraces all the major "world religions." Each of these religions, including Christianity, is a diverse category, encompassing many different understandings of religious life. At the same time, many South Africans draw their understanding of the world, ethical principles, and human values from sources independent of religious institutions. In the most profound matters of life orientation, diversity is a fact of South African national life. Given a violent history, however, analysis of South Africa's religious diversity has been mobilized along lines of difference, as analysts have rendered religion as an inherently oppositional force in a politics of opposition.

So, is religion the problem or solution? Generally, public debate about the force of religion in society has been organized by such either/or propositions. Religion is a force for either freedom or bondage, for either peace or war, for either mutual recognition of antagonistic polarization. Analysis of religion and social change has also tended to be framed in terms of oppositions - public and private, the one and the many, tradition and transformation - that inform research agendas and public policy. In this book, authors from South Africa, the United States of America, The Netherlands, and Germany test these oppositions.