This article explores the reform of the school system in Schleswig-Holstein towards a two-tier system since 2007, which will rest upon two equal pillars – the Grammar School (Gymnasium) and the Comprehensive School (Gemeinschaftsschule) – both leading to the diploma qualifying for university admission (Abitur). Based on two theses, the author shows that the reform of the education system has not evolved in a linear way. Instead, it has been subject to various frictions caused by changes of government on the one hand and by local “veto-players” on the other. However, consistent efforts of local actors have succeeded in substantially influencing the reform process. With the approval of the introduction of new upper secondary classes (gymnasiale Oberstufen) in nine comprehensive schools in 2013, these schools have reached their second stage of development in Schleswig-Holstein. Using the example of the “Comprehensive School Handewitt” and considering the school development planning by the District Schleswig-Flensburg, the difficult path towards the establishment of upper secondary classes is demonstrated. Among the two remaining types of schools in Schleswig-Holstein – grammar school and comprehensive school –, it is the latter that – being an “inclusive school” – better lives up to the expectations of a future-oriented “one school for all”. 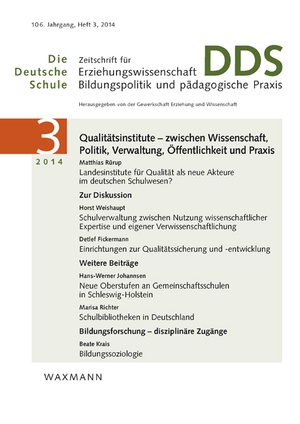