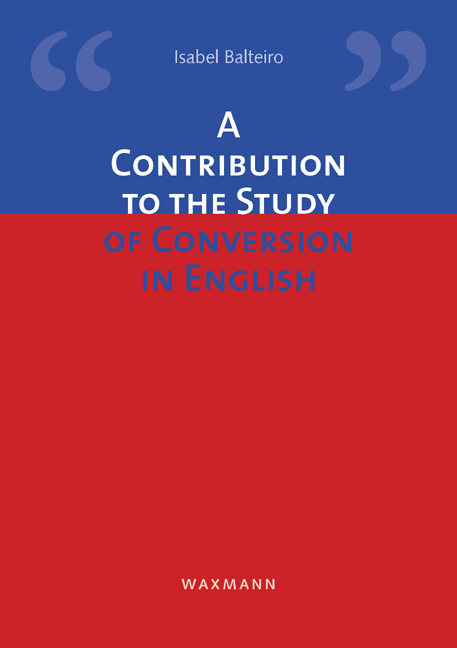 A Contribution to the Study of Conversion in English

This work intends to provide new insights on a controversial word-formation phenomenon or process known as conversion or zero-derivation. It offers a critical review of previous theories and approaches to this subject but it also attempts to provide a new definition, discusses the appropriateness of using one term or the other to name the phenomenon, and identifies its main characteristics. For doing so, it discusses issues such as whether (1.) the category or word-class change is a strictly necessary condition, (2.) priority is to be given to the syntactic function or rather to the change of word-class, and (3.) the result of the process is a derived word, two different and independent units or rather, one form with two clearly differentiated units. Moreover, this study delimits conversion versus other linguistic phenomena with apparently similar results (levelling, ellipsis, shortening, among others), and discusses its different types or classifications (partial and total conversion, and change of secondary word-class). The conclusion is that, despite the appearance of being a "jack-in-the-box" or a "dumping ground" in which any linguistic process involving two formally identical elements may be included, conversion can be both delimited and distinguished from other phenomena with (apparent) similar results.

In sum, "A contribution to the study of conversation in English" can be considered a summary of the state of the art and a compendium of different opinions about conversion in English. The variety of conceptions which are included and assessed offers the reader the possibility to notice the links between some opposed perspectives for a better understanding of this process. As the reader advances, there is the feeling that conversion is much more complex a process than it initially seems and, in that sense, Balteiro sucessfully portrays the many nuances of this process.
In: SKASE. Journal of THEORETICAL LINGUISTICS. Vol. 4 (2) 2007.